This Muslim Blogger Makes An Important Statement About Beauty

The following is an interview with Nura Afia, a 22-year-old beauty vlogger, mother, and wife. She has been making beauty videos on YouTube for five years and has over 200K followers. As told to Mi-Anne Chan.

“I started watching YouTube videos when I was at home breast-feeding after I had just had my daughter, Laila, to pass the time. There [weren’t many] Muslim hijabi YouTubers [back then]. I wanted to make videos because I felt like there might be other girls like me out there. I wanted to show people that I can still be married and a mom and do whatever the hell I want — [my scarf] isn’t going to stop me.

“[Personally], it’s always been a struggle [wearing my scarf], and I’ve always felt like I had to prove something to the world. Growing up, I [always felt] like everyone would look down on me just because I wear a hijab. They think I’m just going to get married and have kids and that I can’t be good at something.”

GROWING UP, I [ALWAYS FELT] LIKE EVERYONE AROUND ME WOULD LOOK DOWN ON ME JUST BECAUSE I WEAR A HIJAB. THEY THINK I’M JUST GOING TO GET MARRIED AND HAVE KIDS AND THAT I CAN’T BE GOOD AT SOMETHING.

Family Support
“My husband was all for [starting my YouTube]. He’s a pretty easy-going person and he didn’t really know what that meant. [But] I hid it from my parents for a while because they are more conservative. I got yelled at for wearing makeup at my wedding by my dad. I eventually told [my parents about the videos] and they were all for it! I mean, it still freaks my mom out. My mom is very private — she goes off and on about it.

“My grandparents [however], aren’t Muslim; my grandpa is Christian-Lebanese, and my grandma is Swiss-German, so growing up we always celebrated Christmas and Thanksgiving with them. I was born and raised Muslim. Growing up and wearing the scarf was really hard and it still is, [especially] with my grandma.

“She’s always made comments here and there. Once I remember [my younger sister] wore a scarf and we went over to my grandmother’s house, and she said, ‘I’m not going to hug you with that on.’ But [now] she’s impressed at how I’ve been able to make a business [for myself]. Because I think she really felt like I couldn’t do anything because I wear a scarf. She really thinks it holds me back.” 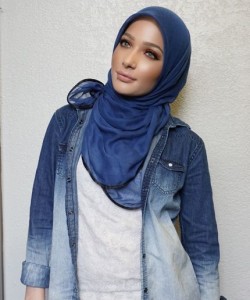 Dealing With The Harsh Criticism
“In the beginning, the community [on YouTube] was very negative. [An agency once told me] that I couldn’t be booked because of my faith and because I wear a scarf. People [also] told me I wasn’t supposed to put myself out there because [of my faith]. Women aren’t supposed to put themselves out there or else you’re labeled as ‘easy’ or kind of slutty. I never get personal attacks from people that aren’t Muslim. I was shocked, then I understood why people within our faith decide to take off their scarves — because women who wear scarves in Muslim communities are always doubly judged.

“If you go to a Muslim girl’s channel who isn’t wearing a scarf, people don’t comment on how she dresses as much. [But] they expect us to be perfect. They comment about every little thing. Like if I’m showing a little too much wrist… It’s terrible.

“[I’m not going to take my scarf off because] I started my whole YouTube [career] with it on and I want to be strong for other younger girls [like me]. And for my daughter’s sake; I don’t want to be flip-flopping in front of her. Sometimes I’ll wear a beanie out and Laila will [ask], ‘Where’s your scarf, Mama?'”

I [UNDERSTAND] WHY PEOPLE WITHIN OUR FAITH DECIDE TO TAKE OFF THEIR SCARVES — BECAUSE WOMEN WHO WEAR SCARVES IN MUSLIM COMMUNITIES ARE ALWAYS DOUBLY JUDGED.

Clearing Up Misconceptions
“People think that we don’t dye our hair or cut our hair because we wear scarves, but everyone does! Just this year I went to platinum blond and I’m naturally a brunette. The salons I’ve been to have a little room in the back or a border that they put around me. It’s hard to find a salon that can accommodate that, but they are around. I just call [the salons] myself. I’ve never gotten anyone to say that they can’t do it.

“People also think I don’t self-tan. I did a video once and [one commenter said], ‘Why are you going to put self-tanner on if people don’t see your body?’ Because, ultimately, a hijab is to hide your beauty for your husband — saving it for one person. [But] I want to look good and curl my hair! I bought a curling iron recently, and the lady [at the register] looked at me weird, and I wonder if it’s because she was wondering what I was going to do with it. The makeup is just a big form of expression on the outside. We do it all and we’re literally the same people!”

Wearing Makeup With A Hijab
“I like to [coordinate my makeup with my hijab]. I love different tones of brown with like a blue scarf and I love burnt reds and oranges with brown scarves and I love the cooler tones with gray [scarves], because they really stand out. And I feel like, depending on how I wear my scarf, I have to bring my blush a little further and make it a little more pronounced than anyone normally would, because my scarf will sometimes cover half [of my blush].

“I never want to be seen as intimidating just because I wear a scarf because I know it is [intimidating] to a lot of Americans who maybe haven’t had a Muslim friend before. I try to wear color but [I] love black scarves so much because it goes with everything!”

Creating A Positive Community
“Islam is such beautiful religion. It’s peaceful and everyone else twists it, even within our own faith. Just from looking at social media, [I see] Muslims bash Muslims, so if that’s happening I can’t believe that we expect non-Muslims not to do the same. It’s just how humans are, I guess. It has nothing to do with religion.

“A lot of people say that I shouldn’t wear makeup because beautifying yourself is kind of the opposite of covering yourself [with a hijab]. But that’s what helps me. It has helped me feel confident in wearing a hijab and I feel like if it has helped me it will help other people, [too]. It’s my way of expressing [myself].

“I hope ultimately that younger Muslim girls will see that they can still do what they want no matter what and I hope that people who aren’t Muslim can see that I’m just like them. The only difference is that I wear a scarf.”